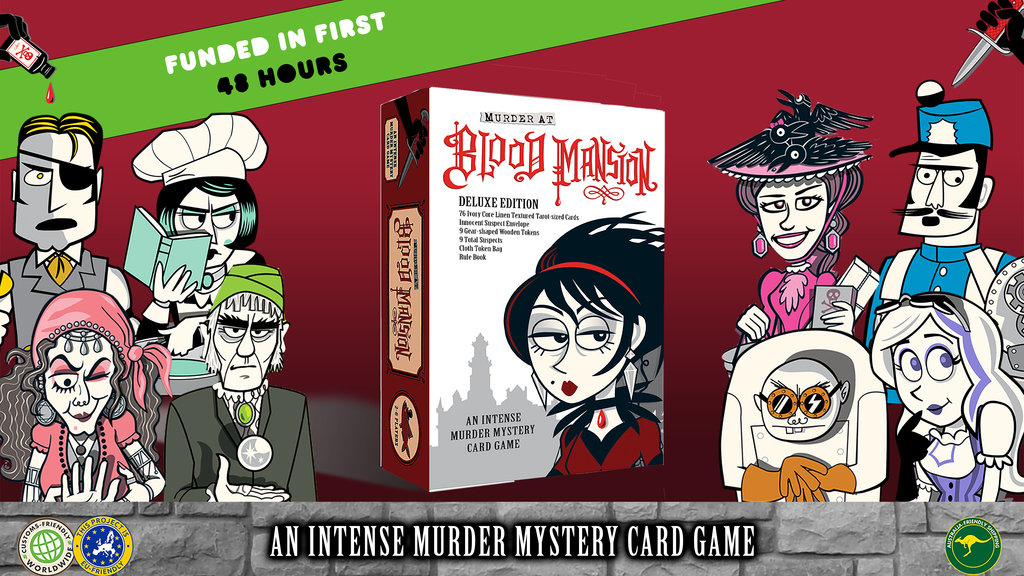 How is Murder at Blood Mansion different from Clue?

I love the game clue! Growing up there was no other game that I wanted to play more. But as I got older I found it harder and harder to find people to play Clue with me. But let’s face it. The game is nearly 75 years old and it’s time we create another storyline and mode of gameplay to solve the crime. So I came up with Murder at Blood Mansion which is sort of like Clue but on steroids and mixed with elements of Uno, Exploding Kittens and Poker(minus the betting). As the game reviewer Father Geek wrote : “The game does feel like Clue a bit, but plays faster and smarter. You have to watch the table pretty closely, keeping track of cards, watching opponent’s faces, and remembering who did what. “

Having said, what are the similarities? A Murder has taken place and one way to win is that you need to solve the crime by discovering who the killer is. There are also suspects and there are weapons and it takes place in a rather large house.

Clue: Where did the murder take place? If you think about it, in Clue you are not only trying to solve a murder but sort of proving a murder even took place to begin with. At the start of the game you don’t even know where the murder scene is. Was it in the Hall? Dining Room? Maybe the Conservatory? Who knows? MABM: Doesn’t matter where the murder took place. It’s a moot point. All you know is that someone is dead and you need to solve the crime.

Clue: Ok, we see that Mr. Body was killed, but at the start of the game no one is sure if the victim was bludgeoned with a lead pipe or shot with a revolver. Not only do you not know where the victim was killed, you have no clue HOW he was killed. MABM: The very first card you flip over reveals the crime scene and weapon used in the murder. Now it’s your job, like in real crime stories, to uncover the weapon.

Clue: The only way to win in Clue is to find the killer, even if it’s you. Again, kind of odd that you are trying to solve the crime you committed. MABM: Once you find out YOU are the killer, obviously you are not trying to find the killer anymore. Instead you are trying to flee the mansion and with the most vital piece of evidence that would help convict you, the actual murder weapon. You escape the mansion or even the town by finding a means of escape such as a horse and buggy, a steamship, bicycle, key or even a train.

Clue: Does not have any other means of solving the crime such as motive or collecting evidence. MABM: Not only do you need to know who the killer is, have uncovered the missing weapon, you need to collect evidence. In the game it’s called guilt points. You need to find enough guilt to help convict a killer before an accusation can be made such as “A bill of sales for the Murder weapon was found in Suspects belongings.” and so on.

Clue: The characters are no different from each other except for by name and gender. MABM: Each character not only has an in depth biography, they each have a special ability, a “Scheme” that they can perform once during each game, such as Demetrius can steal 2 guilt cards from any player or Zona can shuffle the draw deck or Lucious can trade hands with anyone and so on. So choosing your character prior to the start of the game can be vital to your strategy.

Clue: Game play is 45 minutes and each game is relatively similar to each other. MABM: Game Play is about 20-30 minutes. And each game varies slightly from one another based on how the cards were dealt.

Overall, with MABM, there can be a lot of bluffing and trickery that takes place for the advanced players of the game, which is why I compare some of the elements to the card game of Poker.

Having said all that, I must admit that I like to say Murder at Blood Mansion is more similar to an Alfred Hitchcock movie or Sherlock Holmes story on a lighter scale. And the game should fit in the same game genre as Clue, Mystery Rummy, Sleuth, Mystery of the Abbey, Kill Doctor Lucky. Whichever fits your fancy. Personally, I like Murder at Blood Mansion the best and 100% of all game players during beta testing agreed.

Will this game really be delivered by Christmas?

Seeing that the game is 95% complete and we have Panda Game Manufacturing lined up as our manufacturer and Ship Naked as our fulfillment we are ready to go with the process of building the game and getting it out the door. The only thing that could delay us are the occasional typhoons halting shipment from China or printing screw ups, or something we missed that I can’t even think of at this point. So, yes, we hope to be that 10% of Kickstarter games that deliver as promised.

You are funded, is that it? Is it over?

There is plenty of room for improvements that’s why we have Stretch Goals. Our base funding of $7717 was just to make the basic game and manufacture it and ship it. All the little additions like using Ivory core cards and turning the making wooden tokens on a mass duplication scale has a cost. We are confident we can meet out top goal of $20K before the campaign is over on Aug 8. Fingers crossed.

Where does all that money go that you raise on Kickstarter?

About 5% to 8% goes to Kickstarter. Then about 40% goes to manufacturing, 20% goes to shipping and fulfillment, 25% goes to the illustrator and then about 10% goes to advertising our Kickstarter campaign. If there’s anymore cost it comes out of our pocket. Running a Kickstarter is just that, It’ a “start”. It’s the begging of a business. Most responsible Kickstarter creators put all their money into their creation. Bottom line is: The more backers you have, the more you need to spend. There is very little left over for profit. (and if this is your first Kickstarter there are a lot of msitakes to be made along the way, no matter how prepared you are.

What will come in every game we deliver?

BackerKit is a service that crowdfunded project creators use to keep track of hundreds to tens of thousands of backers—from shipping details, pledge levels, preferences and quantities, whether they have paid or had their card declined, special notes, and everything in between!

The BackerKit software and support team is independent from the campaign’s project team—BackerKit does not handle the actual reward shipping. For more information about the preparation or delivery status of your rewards, please check the project's updates page.

How does BackerKit work?

After the campaign ends, the project creator will send you an email with a unique link to your survey. You can check out a walkthrough of the process here.

I never received my invitation. How do I complete the survey?

The most common reasons for not receiving a survey email is that you may be checking an email inbox different from the email address you used to sign up with Kickstarter, Indiegogo or Tilt Pro account, or it may be caught in your spam filter.

Confirm that the email address you are searching matches the email address tied to your Kickstarter, Indiegogo, or Tilt Pro account. If that doesn’t work, then try checking your spam, junk or promotions folders. You can also search for "backerkit” in your inbox.

To resend the survey to yourself, visit the project page and input the email address associated with your Kickstarter, Indiegogo or Tilt Pro account.

How do I update my shipping address?

When will my order be shipped, charged or locked?

That is handled directly by the project creator. BackerKit functions independently of the project itself, so we do not have control of their physical shipping timeline. If you want to check on the project’s status, we recommend reading over the project's updates page.

I completed the survey, but haven't received my rewards yet. When will they arrive?

As BackerKit does not actually handle any rewards or shipping, the best way to stay updated on the shipping timeline would be to check out the project's updates page.

You may not have an account. You can create an account by clicking the account confirmation link in any survey you have. You can also get started with signing up for a BackerKit account here.

If you have created an account and have gone through the previous steps, but are still having trouble, please reach out to us via the contact form. Let us know any important details (browser type, mobile device or computer, OS, etc).

Do I need a BackerKit account to fill out/receive my survey?

You may or may not have an account set up, but you can access the Account Request Confirmation from the bottom of the confirmation page of any of your surveys.

How do I update my email address in my backer account?

Contact BackerKit support by signing in to your BackerKit account, and then clicking on “Need Help?” in the top right side of the page! We will ask you to verify that you are the account holder; and to provide the new email address to which you would like to update your account. You can verify by your ownership of your backer account by either of the following methods:

* Sending us a screenshot of your original pledge that shows your backer number on Kickstarter (or Indiegogo, etc).

While signed in to your BackerKit account, click on “Need Help?” on the top right side of the page.

BackerKit is a service that crowdfunded project creators use to keep track of hundreds to tens of thousands of backers—from shipping details, pledge levels, preferences and quantities, whether they have paid or had their card declined, special notes, and everything in between!

The BackerKit software and support team is independent from the campaign’s project team-BackerKit does not handle the actual reward shipping. For more information about the preparation or delivery status of your rewards, please check the project's updates page.

A backer account helps backers (like you!) to keep their surveys organized. Oftentimes, people who support projects that use crowdfunding support multiple projects across crowdfunding platforms. Any project that uses BackerKit will appear in your BackerKit account, and will allow you to help keep track of updates such as address, items, timelines, support, etc.